Related Article: What is a Cross Functional Team?

Challenge No. 1: Too Many Priorities

Tip No. 1: Think from the Top of the Triangle 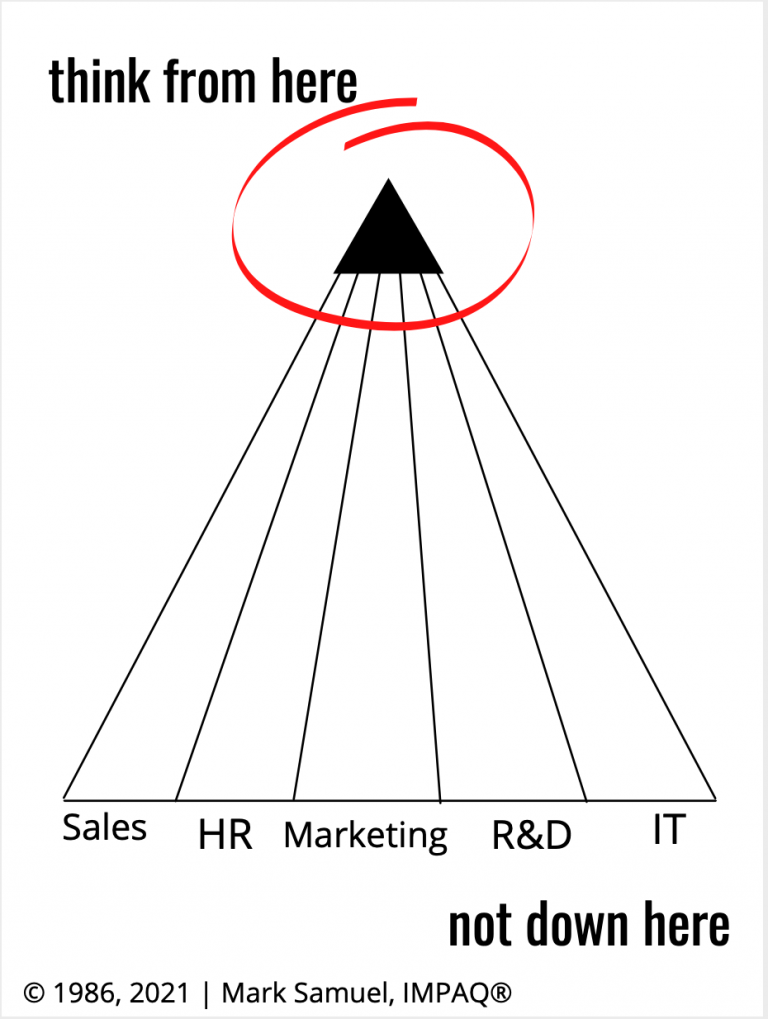 An organization is like a triangle, with each department separated at the bottom. When you operate with just your own department in mind, you lose perspective on the company as a whole and as you try to do what’s best for your department’s objectives, you inadvertently create breakdowns for and take resources from other departments. The problem is, it’s the organization as a whole that both the customers and the stockholders see, so if there’s a breakdown in one department, it shows badly on the whole organization.

Challenge No. 2: Bad Blood Between Teammates

Leaders of different departments can often get into competitive relationships with one another and develop bad blood. When you work in siloed departments, any department that isn’t yours can look like your enemy! After all, you’re competing for resources, blaming each other when breakdowns occur, and causing each other a lot of grief. This doesn’t just change in an instant when you decide to come together to create a cross-functional team! So how do you get past any bad blood from tense relationships of the past?

Tip No. 2: Focus on Desired Outcomes

It can often look like we need to solve relationship breakdowns before we get to work, but this could not be further from the truth. While it never hurts to have an honest conversation with a coworker to clear the air, we recommend simply focusing on what brought you together in the first place – achieving your company’s desired outcomes!

Work together to clarify your shared desired outcomes as well as what you need to do differently to achieve them. Create and commit to team habits of collective execution including things like communication protocols, speaking with one voice, meeting frequency, and commitments to problem-solve together to prevent and solve breakdowns. Oftentimes, once people get on the same page about where they’re going and how to get there, relationship and trust issues simply dissolve!

Of course, it helps to go in with a positive attitude, an open mind, and an assumption of good intent. It’s also extremely important to have shared ownership for desired results. This way, you won’t be tempted to blame each other when things go wrong. You’ll simply make the effort to problem-solve together and support each other to do your best and reach your shared goals.

Coordination and communication breakdowns can happen with any team, but it’s especially likely with a cross-functional team that isn’t used to working together. Each member may have different expectations about communication protocols, they may not be used to each other’s styles or personalities, and they won’t have their coordination down if they’re new team members.

It’s important for cross-functional teams to create their own team habits for how they are going to communicate, problem-solve, and meet their priorities. Each team is different, so the habits you create should be ones that the team agrees will be most effective toward reaching the team’s desired outcomes.

It’s important not to just go into the team thinking everyone will be on the same page about how to function. Communicating expectations and creating team habits will create accountability among team members as well as give you a measure for whether you’re on or off course. Simply put, if you don’t practice your habits, you won’t get where you want to go!

We’ve all been in meetings that drag on with the information sharing. Couldn’t you just send it in an email?! Long meetings that waste everyone’s time won’t get the team where they want to go. They’ll just breed resentment, and frustration, and prevent team members from getting their real work done.

Tip No. 4: Outcome-Driven Meetings that Focus on Problem-Solving

Team meetings should not be primarily used for information sharing. They should be used for problem-solving! You can use some of the time to share information and catch each other up, but the majority of the meeting should be used to surface issues that have come up, potential issues that the team foresees, and obstacles that could prevent the team from meeting their goals.

Use the time together to help solve problems, think of creative solutions, and prevent future breakdowns. The more proactive the team can be about recovery, the more smoothly the team will be able to achieve their desired outcomes. Remember to keep your team’s outcomes as your north star. Anything that’s not working to meet those outcomes can and should be adjusted. Growing and achieving breakthrough results is a learning process! Use mistakes and breakdowns as opportunities to think of creative solutions and to learn more for next time.

It’s natural when a group of people comes together as a team for one or more of the members to want to become the leader and the hero. However, this can create a lot of problems among the team, whether or not the rest of the team members follow the emerging leader. For one, it prevents the diversity of ideas and experiences that make the cross-functional team strong in the first place from being fully expressed and heard. It can also dilute the shared ownership and accountability that the team has for their shared outcomes and team habits. At its worst, a team member who wants to be the hero can derail the team from reaching their desired outcomes, forcing their personality to the forefront of everyone’s attention instead.

Tip No. 5: Become a Cohesive Team

While it can be helpful and even necessary for a team to have a leader, teammates are actually more likely to be accountable to their peers than they are to a leader or a manager. Teammates must rely on each other for support, they must problem-solve obstacles and breakdowns together, and they must have a sense of shared ownership for the work that they’re doing.

Becoming a cohesive team will eliminate the need for a team member to step up as the hero because everyone will be committed to doing their work and the team will find more value and leverage in forming a web of support rather than a hierarchy. If someone does start to try asserting dominance, the rest of the team can make sure it doesn’t get out of hand and balance is maintained through equal sharing of ideas, transparent and honest communication, and a commitment to outcomes rather than the dominance of personality types.