By Mark Samuel and Nate Johnson

What do Blockbuster, the San Francisco 49ers, and me in the 9th grade have in common?

We all played not to lose; we played safe. And consequently, we all lost.

Blockbuster steamed on when a titanic iceberg was in its path.

The 49ers had Super Bowl LIV in the palm of their hand. But when their 10-point lead became more precious than winning, the Kansas City Chiefs marched right past them to victory.

And at 14, my dad saw potential in me and offered me $100 to sing the national anthem at a high school basketball game. Big money at the time. But what would happen if I screwed up? It would be all anyone would talk about for the rest of their lives! Rather than take the risk, I played it safe, and not only lost out on $100 but a chance to step into my potential.

How Do You Know You’re Playing Not to Lose?

Externally: Your competition is nipping at your heels.

Internally: You feel it.

Your internal sense will tell you you’re playing it safe long before external indicators take you out of the game.

The following phrases are commonly used by leaders and organizations as a tonic to alleviate the bitter taste that accompanies a lack of courage.

Recognize those little spurts of acid in your gut when you watch an opportunity pass you by. You think that’s fear, but it’s not–it’s a shame. Like a soldier retreating from his battalion in the heat of combat, it’s your mind and body telling you you’re running from your responsibility of actualizing your capabilities.

Learn how accountability increases your value and income as an employee. 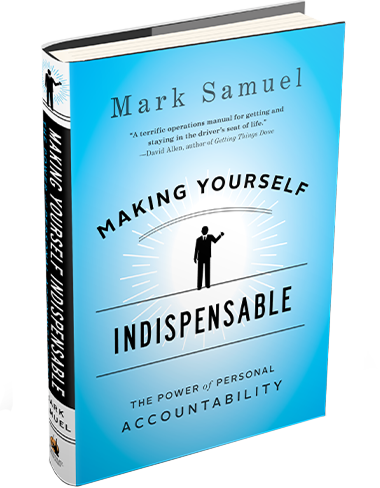 3. You Use Denial and Justifications to Make Yourself Feel Better

I mean, what’s the harm? You’re still the same person as you were if you didn’t take that risk. So no, you didn’t win. But you also didn’t lose. Right?

Inherently, nothing. Instead, it’s your relationship to it. You see, safety is like water–it can keep you afloat, but it can also drown you.

Playing Safe vs. Having a Safety Net

When trapeze artists try difficult moves, they have a safety net. Sparring partners allow MMA fighters to increase their skills in a safe environment. Top companies create “Proactive Recovery Plans” for getting back on track when things go awry or old habits take over.

But, a trapeze artist doesn’t put bread on the table, never attempting new moves. The fighter must enter the ring. Your company must create, take a risk, and compete.

A safety net gives you the means to win. But playing safe is a surefire strategy to fail.

Don’t Rob Yourself (and Us) of Your Potential

Les Brown tells us that the wealthiest place on earth is not a diamond mine or oil well–it’s the graveyard.

Whether out of fear, indifference, or assuming someone else could do it better, if you play not to lose, you rob the world of the opportunity for beauty and progress.

So how do I play to win without being reckless?

First, playing to win is not the opposite of playing not to lose.

Second, innovation and risk are not synonymous with being reckless. Do you think Alex Honnold ascending El Capitan with no rope is being reckless?

1. Play to Transform Rather than Playing to Win or Not to Lose

Tesla focuses internally to be better than they were yesterday. Their customers care (and they love it).

Those who desire to increase their value, to obliterate mediocrity, to ensure they’re not wasting their potential, don’t play the game to win or not to lose — they play to transform themselves and by doing so end up changing the game for everyone.

2. Take Chances without Being Reckless

How do you take chances without putting yourself or your company at risk? By making innovation a part of your environment.

Create an environment that promotes the realization of potential and not the maintenance of your current position, and you will be blown away by what you or your company can achieve in a short amount of time.

If you’ve read this far, chances are you know what it’s like to play it safe–to play not to lose.

But hey, you’ll have other opportunities, right?

The 49ers will likely have a shot at other championships, but not Super Bowl LIV.

As for me, I’m happy to say I’ve earned more than $100 since my freshman year of high school. And I have sung professionally in front of large crowds since then. But I’ll never know how overcoming that intense fear at a young age might have changed my path.

If it eats away at your core that you could have taken a chance and didn’t, then next time, take it. If you know your company should be innovating, but you’re not, start now.

Play to raise the bar. Play to try something new. Play to play. Play to enjoy your life, your business, and discover your potential.

And if you’re still unsure if you should take that leap, then here’s a challenge for you: try to find someone – anyone who has already done it, and regrets it.

Leave a comment below on how you plan to play to transform yourself and your business.